Connectors or Conjunctions in Detail – English 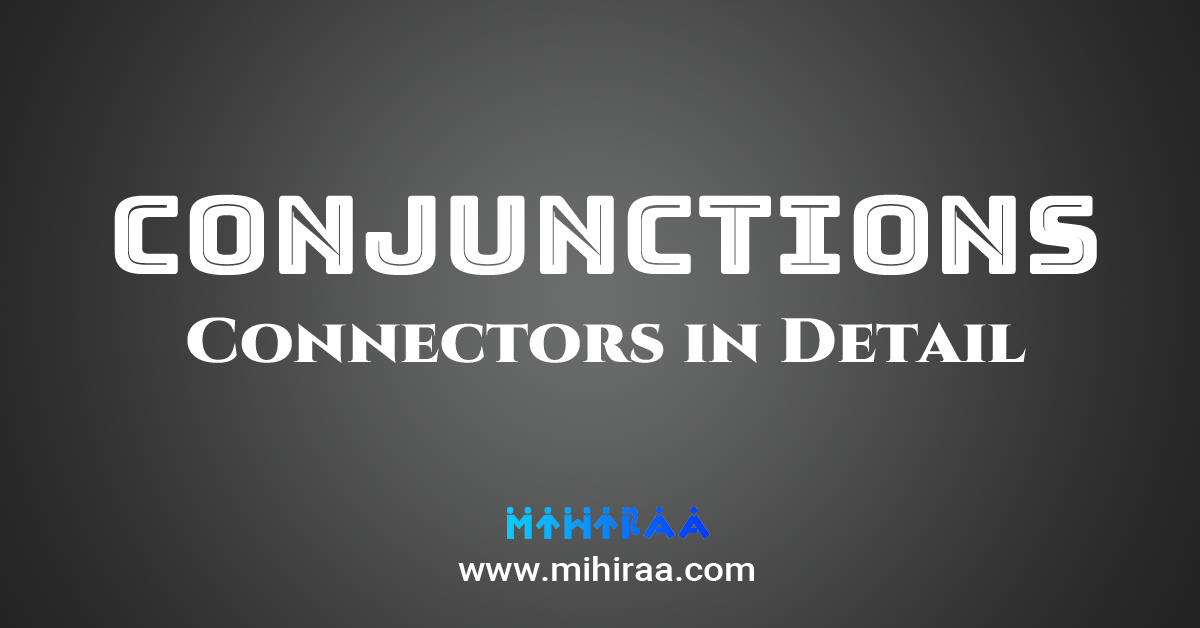 There are seven coordinating conjunctions which are by far:  and, but, for, nor, or, so, yet.

The coordinating conjunction is the most common conjunction or connector we use. These join two words, phrases, or independent clauses, which are parallel in structure.

It’s easier to memorize the seven Coordinating Conjunctions with the acronym – FANBOYS.

The correlative conjunctions are not only – but also, either– or, neither – nor, both – and, not – but, whether – or etc.

Compound Conjunction are: so that, provided that, as well as, as soon as, as long as, such that, in order that etc.

Compound Conjunction are conjunctions that have two or three parts. The phrases which are used as conjunctions are called compound conjunctions. Each and every part of these does not have to be conjunctions themselves. The parts become inseparable in the sense that they tend to pop up next to one another more often and not.

Two independent clauses in a sentence must be separated by a comma and that goes for no matter what conjunction is used. If the clauses attached by the conjunction can stand as complete sentences, a comma must be used between them.

In the case of Adverbial Conjunctions joining two independent clauses, the most common punctuational practice is to use a semicolon before It and a comma after that while the two complete thoughts are situated on either side. Some opt for two commas on both sides of the conjunction and there is another practice to separate the two clauses with a period while the capitalized conjunction starts the next sentence followed by a comma.

A conjunctive adverb connects phrases or independent clauses. They helps to bring together two complete thoughts like some of the other Conjunctions while also being Adverbs themselves. It provides transitions between ideas and shows relationships. They are also called Conjunctive Adverbs.

Use conjunctive adverbs or connectors to:

Let’s have a look at some of the common conjunctive adverbs.

How to punctuate conjunctive adverbs?

When a conjunctive adverb connects two independent clauses in one sentence, it is preceded by a semicolon and followed by a comma.

If a conjunctive adverb is used in any other position in a sentence, it is set off by commas.

This is a list of common single-word time adverbs.

Adverbs of time mainly modify verbs and tell us when something happens.

The word bimonthly is ambiguous and best avoided. Bimonthly can mean “twice a month” or “every two months”. The same is true of biyearly and biannually.

Allow me for better site experience

We use cookies on our website to give you the most relevant experience by remembering your preferences and repeat visits. By clicking “Accept”, you consent to the use of ALL the cookies.
Do not sell my personal information.
Cookie SettingsAccept
Manage consent

This website uses cookies to improve your experience while you navigate through the website. Out of these, the cookies that are categorized as necessary are stored on your browser as they are essential for the working of basic functionalities of the website. We also use third-party cookies that help us analyze and understand how you use this website. These cookies will be stored in your browser only with your consent. You also have the option to opt-out of these cookies. But opting out of some of these cookies may affect your browsing experience.
Necessary Always Enabled
Necessary cookies are absolutely essential for the website to function properly. These cookies ensure basic functionalities and security features of the website, anonymously.
Functional
Functional cookies help to perform certain functionalities like sharing the content of the website on social media platforms, collect feedbacks, and other third-party features.
Performance
Performance cookies are used to understand and analyze the key performance indexes of the website which helps in delivering a better user experience for the visitors.
Analytics
Analytical cookies are used to understand how visitors interact with the website. These cookies help provide information on metrics the number of visitors, bounce rate, traffic source, etc.
Advertisement
Advertisement cookies are used to provide visitors with relevant ads and marketing campaigns. These cookies track visitors across websites and collect information to provide customized ads.
Others
Other uncategorized cookies are those that are being analyzed and have not been classified into a category as yet.
SAVE & ACCEPT
error: Content is protected !!